It sings- In the trees, in the wind, in all the movements of the city -in me. On this  my first CD I want at first hand to communicate a strong feeling for life, poetry and affinity with nature. In my own writing music always comes first. Words are equally important, but have a longer journey. On the CD are 7 songs of my own and 4 beautiful, seldom heard compositions by Mingus, Kirk, Dameron och Brown.jr. The brilliant musicians that have contributed with a lot of fruitful ideas are: Adam Forkelid – piano, Pär- Ola Landin – bass, Calle Rasmusson – drums, Anders Åstrand-marimba, Johan Öijen – guitar and Klas Toresson- saxophone. 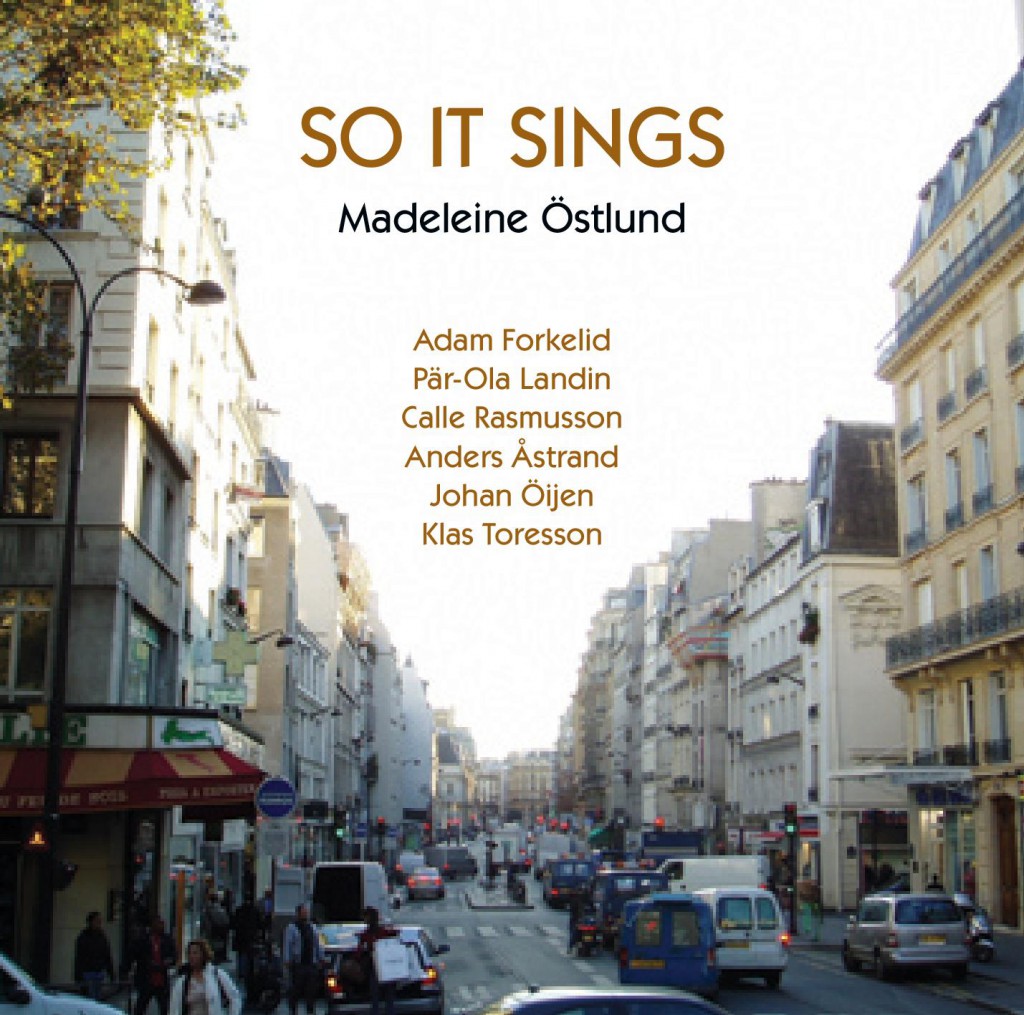 Vocal jazz. This is singer Madeleine Ostlunds debutrecord. She has written both lyrics and music to most of the tracks, but here is also music by Charles Mingus, Roland Kirk, Tadd Dameron and Oscar Brown jr. She sings with a nearness and warmth that makes this CD to a listners’ adventure. Her own lyrics create a natural unity. Pianist Adam Forkelid plays long melodic lines and emphasizes even the small nuances in Madeleine Ostlunds singing. The music has many faces and expressions.

Here mingles swing, lyrical melancholy, as in the beautiful Rain,rain, and the bluest blues as in Oscar Brown jr:s When Malindy Sings, with swinging tenorsaxplay by Klas Toresson The CD is very well worked-out, but the playfulness is not forgotten. Others that are heard is the sensitive bass-player Per-Ola Landin, Calle Rasmusson on drums, Anders Astrand on marimba and Johan Oijen on guitar.

JAZZ “So it Sings” (Jiiva Records)

Can it be that the one who sings jazz is never better than the accompani-ment permits? I don´t know,
but this is anyhow a very good CD, due to Madeleine Ostlunds way of singing without prestige and
the sovereign support she gets from the accompanying musicians, among whom is notedAdam Forkelids
longlined piano, the warmlander Johan Oijens spakling ,tasty guitarplaying and, dare I say, Anders Astrands sensational playing on the marimba – the last mentioned becomes the little extra that gives thesongs a
wonderful, weightless quality. The songs are partly Ostlunds own and partly fastidiously chosen covers by Mingus, Kirk, Oscar Brown Jr and Tadd Dameron.

….Östlund is a brilliant vocalist, sings in tune, has good phrasing and exemplary articulation…Especially Damerons

The Happy Heart shows that Östlund has potential as a jazz

diva and it must also be emphasized that the swedish numbers have their own soul and body.

There is no lack of swedish jazzsingers. Many are also of high class. At the same time one can miss vocalists with a totally independent direc-tion, voices that stick out.

Madeleine Östlund has chosen a fairly conventional direction on her CD debut “So it Sings”. She readlily moves in a well tried tradition. This is not, however, a question of standardinterpretations. Seven of the eleven songs carry her own signature and as well as these, some rarely played numbers of Charles Mingus, Roland Kirk and some others are heard.

Among the co musicians are noted Adam Forkelid, piano and Johan Öijen, guitar.

Equally clear is Östlunds poetic ambition, a side that is shown in both lyrics and music. The airy sound opens to pictures full of atmosphere.

Still one more new Swedish jazzsinger to add to the ever increasing list.

The level of ambition is high when she presents some of her own songs and lyrics, which are personal and well to the side of the well tramped path of Sarah and Ella.

….of which Kirks, “Waltz of the Friends” with Madeleines own lyrics is one of the album´s highpoints together with Tadd Damerons “The Happy Heart”.
The interplay with the co-musicians gives evidence of the same musical philosophy and here we notice particularly the much demanded pianist Adam Forkelid, Johan Oijen on guitar and Klas Toresson, saxophone.

The latter I heard a few years ago in Sandviken Big Band and even then he showed that he would gain a reputation for his fine musicianship.One of the more personal swedish vocal productions in this genre, but hardly for someone who has already decided that vocal jazz should sound exactly as Ella F did with Chick Webb 1938

Madeleine Ostlund makes her debut with a splendid CD.

Fine music of her own and some great numbers of among Charlie Mingus and Roland Kirk.
Madeleine Ostlund has an excellent jazzvoice and also that certain feeling that is needed.
Adam Forkelid plays a piano worthy of imitation, Per-Ola Landin is a sensitive bassplayer with a driving pulse, Calle Rasmusson handles the drums with finesse, Johan Oijen plays a living guitar and Klas Toresson comes in with beautiful saxtones.
Add to that Anders Astrand with the marimba, a not at all usual but very wonderful instrument and the result is a both stylish and pleasant jazz with a little different flavour.

Madeleine Ostlund has in this sextet the perfect backing which means that both her voice and style can be heard at their best. We can expect to hear more from Madeleine Ostlund.